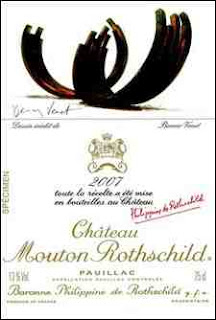 Even if you don’t drink first-growth Claret everyday for breakfast, you’ll soon be seeing a lot more of the sculptor Bernar Venet.
Venet’s sculpture in steel graces the latest release 2007 Chateau Mouton Rothschild label. This is the first time the artwork on the label has been a sculpture – and it has quite a serious tone, especially in comparison to previous vintages.
Apart from the eerie 1983 label, which is very bleak and existential, most previous labels seem to me to have something childishly gleeful about them: sheep doing handstands (1999, Raymond Savignac) or my favourite one of a sheep dancing in the sunlight (1982, John Huston).
Who wouldn’t be ecstatic? The artist doesn’t receive money but 10 cases of Mouton Rothschild for the commission. That’s something to jump for joy about.
Perhaps a parallel can be made between the 1983 and the 2007 – both are not spectacular vintages for this generally spectacular wine (if it is not too incongruous to have “general” and “spectacular” together in the one sentence – after all, compared to other vintages of this wine, 2007 is “lower” 90-94 Robert Parker score)
But the sculpture, and choice of artist, does give pause for thought. Which is quite prescient for this vintage and year in history.
If I am lucky enough to open a bottle in the next twenty years, I’ll look back on 2007 as a year when the economic crisis really began but the ramifications hadn’t fully been realized yet (I’m sure we will still be dealing with consequences).
Since then there has been a shake-up in wine prices, with cellars being sold in bulk. An end of an era? I don’t think so. Not for Mouton-Rothschild, at least.
As their motto neatly sums up: Premier je suis, Second je fus, Mouton ne change. Despite 2007 not being a great vintage and the subsequent economic crisis, Mouton-Rothschild will survive just as they have depressions, recessions, World Wars and oil crises before.
Personally, I look forward to the opportunity to taste it in 20 years come what may.
Link: Bernar Venet Studio
Previous WWS link: Chateau Mouton Rothschild label artists: Miro, Picasso, Francis Bacon