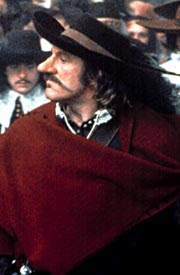 “I’d far rather work with wine-makers than actors. They don’t talk as much. If you have to explain a film as an actor or director, or even your wine as a winemaker, you lose the mystery.

“It is like asking Mozart where he found all those notes and what made him put them in that particular order.”

With women… and wine.

Since the early 80s, Gérard Depardieu has been making wines in partnership with renegade winemaker, Bernard Magrez. He has seven labels made from vineyards in Bordeaux, Languedoc in the south of France, as well as in Spain, Morocco and Argentina.

Depardieu unashamedly lives large. His wines have a New World taste, even the French wines have a happy, almost jolly, fruit-driven feel.

The moral of Cyrano, as well as, Depardieu and his wines?

Next in Cinematic Wine Series: WWS goes full throttle to the end of the world.