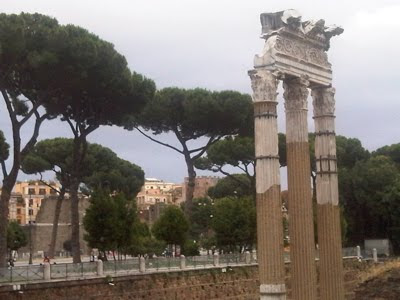 The real voyage of discovery consists not in seeking new landscapes but in having new eyes. – Marcel Proust

“What I don’t understand,” said my Roman friend as we walked through the ruins of the ancient city of Rome, “is how these high prices of Bordeaux wine (En Primeur) can be in the public good?”
Yesterday I was on holiday in Italy. Frankly, I needed a holiday. After waiting weeks for the big names of Bordeaux to release their wines, and just a torturous drip drip drip, I was officially in a Bordeaux sulk.
Then, whilst away, Leoville Poyferre, a Chateau I call “good value drinking claret”, released their wines at +172% on 2008 and +50% on the already highly-priced 2005.
Some wines from 2009 vintage are very good this year, but does this justify the substantially higher price? Feeling rather like an ancient philosopher walking amongst the ruins, however, I felt I should argue the opposite point of view…. The SPQR written everywhere in marble (or, Senatus Populusque Romanus “The Senate and the Roman People”) inspired debate:
“These are great wines, some with hundreds of years of investment behind them,” I said, I admit, rather weakly, “That previous investment over a hundred years by the Rothschilds, for example, must count for something. A brand equity or value, if you will. That pushes up the cost. Perhaps Lafite is worth £1000 or more per bottle.”
“Sure, some wines will be expensive because they are good quality. But is there a link between the cost of production and the release price? Who can afford these wines? And is it based on demand? Only people who invest in them, such as banks and investment companies, who flip them like any other financial product to make money.”
“But what worries me the most when you talk about Bordeaux, is if you have a great object, such as these great wines, then is it right to lock it away in investment bonds so that no one eventually drinks them?”
“If you can afford a Van Gogh, you have a duty to the community to show it to other people. Not lock it up in a storeroom in Switzerland. If you have the Colosseum, you must take care of it as a public duty. These are investments, yes, but the owners have a public duty to take care of them.”
Perhaps it’s because we were talking in Italy, where wine is so much part of the fabric of society, where wine is considered a public good, to be shared and enjoyed, this argument can be put forward. It’d be different in London, where wine merchancy is part of the wine culture. But travel brings new eyes, and walking through ancient ruins, tripping over history at every street corner, it does raise questions about what is Bordeaux wine: is it a wine to be shared and enjoyed, or is it a liquid commodity.
I have no answer to the high prices of Bordeaux, and it’s childish to scream “it’s not fair my £100 wine is now £350”! But, if it is a commodity, then perhaps the prices should be regulated like other financial products.
Bubbles are fine in Prosecco, but price bubbles cause large headaches in the long term.
Let’s hope the debate continues for the benefit of all in the Wine Republic.