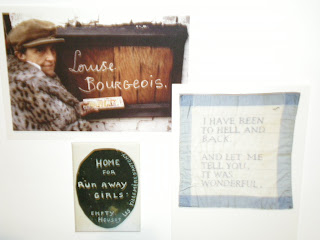 my shrine to Louise Bourgeois

Facebook. Is it a blessing or a curse? It keeps friends close but do I need to know someone I once loved is getting ready to throw a party for the real love in his life? I’ve been adding people, and, removing people since I’ve been here. Sadly, it sometimes feels more like an audit than a party.

It’s a very different experience travelling with email, facebook and text messaging than it was 10 years ago when I wrote postcards and letters. Now, it’s never been easier to be closer to friends, but its never been harder to work out to know who are your real friends.

Recently, my status update on Facebook read: JMD is in a home for runaway girls.

It was a bit random to say, but I had just seen the Louise Bourgeois exhibition at the Tate Modern. I have followed her work for a while, she is 96 years old after all, yet this exhibition was the most comprehensive I’ve seen. I was so inspired by her body of work, when I got home, I made a little shrine to Louise Bourgeois in my new apartment. Above is a postcard of her (who sends postcards anymore?) and her piece entitled: “Home for run away girls. Empty Houses. Les Fillemere d’Antony.” Empty houses left behind. 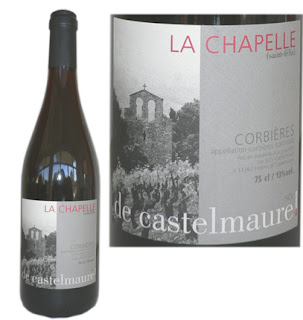 Made by a small co-operative nestled in the Corbières hills (between Perpignan and Narbonne) in the Languedoc, South-West France, the quality of the end wine is decided by everyone before it is released. There’s not just one person’s reputation on the line, it’s the whole terroir.

You can tell the fruit is of the highest quality and handled with care by a group of like-minded people.

South-West France is producing very interesting, modern wines at the moment. I like to sample wines from this area; there seems to be more experimentation, and less hindrance by old traditions and customs like other regions in France. The French agitateur is alive and well here, thank God.

Made from Carignan (50%), Grenache (30%), Shiraz (15%) and Cinsault(5%), it has unexpectedly fresh, clean characters shining through without foresaking the strong brambly, dark tones of French rustic wines. The depth develops over the night like a wine you’d pay double the price.

Run to the Corbières hills