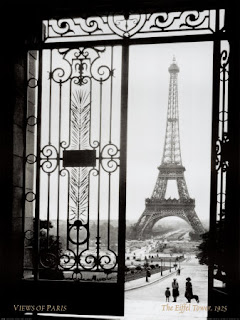 You could say most of the things you do as a tourist are cliché. Visiting the Eiffel Tower – cliché. Lying on Jim Morrison’s grave, again, cliché. Having a croissant with a good cup of coffee, also cliché. But all this so-called cliché in Paris doesn’t seem to make any of it any less enjoyable.

What’s the definition of cliché? Something so overdone that it’s lost it’s meaning. But I could see the Eiffel Tower a million ways, or visit the Pere-Lachaise cemetery again and again, or enjoy a warm croissant every morning without any less thrill than when I experienced these things the first time I went to Paris.

Anyway, perhaps I’ve been guilty of perpetuating my own clichés. Too often I’ve sold Rosé by saying – “Well, you do know, that’s what they drink in Paris!” It must tap into a dream for women about living the life of la Parisienne. Because it never fails to sell Rosé.

Is it true or just cliché?

As soon as I put my bags down in my hotel room in Montparnasse I was keen to find out immediately – do Parisians drink as much Rosé as I had made people believe?

I ventured out onto the streets of Montparnasse to find something to eat and just stare at what everyone else around me to find out what Parisians really drank and ate.

It was late afternoon and the sun was just about to set. If I was going to be cliché about it, I could say, the sunset was blushing pink like a Rosé. But then that really would be a cliché because it wasn’t true. Plain yellow sunlight fading into the usual same-old black night.

But wait! Looking around on the cafés in the street, very intellectual looking people discussing over wine glasses, were pitchers of… Rosé.

I took a seat at a bistro on a busy street in Montparnasse, full of cafe tables along the pavement. I chose a foie gras salad – slices of foie gras, slices of duck, toasted croutons on a bed of lettuce and tomato sprinkled with parmesan and a vineagrette. Probably the most simple, yet satisfying meal I’ve ever had. (Hyperbolic, but true). Then like silent clockwork, along came a wicker basket of sliced French bread on my table.

I pretended to read the menu and ordered a pitcher of the Côte du Provence Rosé, about two and a half glasses.

Côte du Provence Rosé is not something I have had a chance to try a lot of in Australia. Mainly because, like Guinness, it does not seem to travel well. Just as there’s nothing like a freshly poured Guinness in Temple Bar in Dublin, or a Budvar in Czesky Budejovice – the Côte du Provence seems to taste better in Paris; and I’ll hazard to say, it probably tastes even better in Provence. Anyway, it just made sense in Paris.

Looking around me, I saw three men in heated discussion over a pitcher of Rosé. A woman sitting alone on a street table with a glass of Rosé being chatted up by a man at the next table. Three students drinking a Rosé (ok, one had a beer).

Côte du Provence featured on every wine menu. I found it to be even more refreshing with a meal than water, and with it’s natural acidity it’s a very good palate cleanser. Obviously, there’s no tannins because there is no oak used when making Rosé. It’s more fun than a white wine, and less to think about than a Red.

The waiter was very kind as I sat for dinner by myself on the first night. Not always a pleasant experience as a woman. But, I have to say: the waiters are amazing in Paris. I know, I know, another cliché.

I’d even go so far as to say as the waiters in Paris are quite flirty. But that’s one cliché I don’t mind indulging in, over and over again. 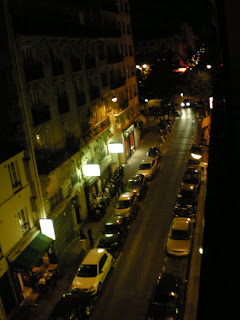 Montparnasse at night. (From my balcony, because I’m too shy to take photos of people enjoying dinner – me, tourist?!)