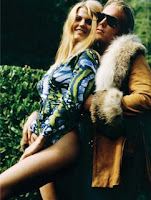 Why have I just finished two biographies about wilful and flamboyant self-destruction through spending large sums of money? I’m bored of my hell, I want to hang out in your hell for a change. Let’s dream on in Less-Than-Zero style (£££, that is).

Bunker Spreckels: Surfing’s Divine Prince of Decadence is about the step-son of Clark Gable who, at 21, picked up his inheritance in an armoured van ($50 mill) and set out on a mission to destroy himself. He asked his friend Art Brewer to document his life; and you can see for yourself in the photographs: he went from sun-kissed young boy to bloated, drug-crazed, gun-toting sex monster. He died of a heart attack at 27, before his film was completed. But you get the gist. I can’t help but get a delicious thrill of schadenfreude observing a surfer self-destruct (Forgive me, but I grew up at the beach yet liked to wear gothic black: not fun).

The other biography is more seductive, or else, educative: Dandy of the Underworld, by Sebastian Horsley. Just like Quintin Crisp, just like Oscar Wilde, Sebastian Horsley believed the artist should also live the artful life, even more than creating actual art itself. To be a Dandy, in the historical sense, is a commitment to a lifestyle completely devoted to aesthetic pleasure and perfection. Even Mr Horsley’s moments of pure squalor seem romantic because they are lived with an absolute commitment to his ideal. A few images will scar for me life: the amputee in the brothel with no arms or legs; well, it only proves there is courage in living your convictions.

Unlike Bunker Spreckel, Sebastian Horsley is still alive, living in Soho in London. He signed my book at Foyles bookshop. In ink, he wrote:

Hello dear, always read something that will make you look good if you die in the middle of it. This is it. Love Sebastian.