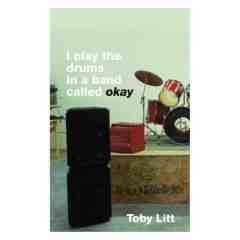 Is this book a cliché? Or do (some) bands believe their own bullshit so much that they become cliché? Does that make the band cliché rendered in this novel true? These are the ouroboros questions I asked myself as I read the 9th novel by Toby Litt.

The structure is laid out like a stage, with the drummer at the back narrating the action around him. Each chapter enters stage left like a short story in itself. Then comes the stereotypes beat out in 4/4 time: self-serving loneliness, chicks digging the lead singer over the drummer, drug-addiction, and the tedium of touring. Boom-tish!

Shuffle to the middle of the book and it gets a little more interesting. What happens after an ego-juggernaut stops? Enter the post-band comedown, when they’re in their 30s and it all begins to become too real… bored and jaded by all the fun but not able to give it up, either. For new haircuts, I mean – bands, in NME magazine this week (or last week, or whatever) it may be a nasty shock to see where it all leads. And it’s not as tragic as you’d believe. It’s downright mundane.

The drummer-narrator could’ve fallen a lot harder. I’ve seen it happen in real life enough to know he kept his sanity (if not his hearing) more than most. But this is fiction, and the band novel is always difficult when truth is often stranger than fiction: can you imagine a novel based on Keith Richards?? Also, the (Canadian, indie) band is called (lower-case, italics) okay; they are not larger than life rock stars. Which left me thinking: who cares?

If the larger-than-life rock star book is what you’re looking for then you won’t find it here. Read The Dirt – Motley Crue: Confessions of the World’s Most Notorious Rock Band for the ultimate band book – for structure, characters (!) and redemption – but I warn you now, only if you can stomach it: it’s not okay.

Link: I play the drums in a band called okay – The Guardian Digested Read