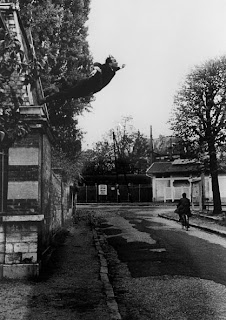 It’s just after 3am. I can hear night birds singing here in London (always the most shocking sound) and I can’t go back to sleep. Had a bad dream about doors. It must be those doors at Greaud’s exhibition I saw yesterday – Cellar Door (once is only twice).

Those heavy doors rolling down from the roof – nightmarish – painted in industrial-strength black matte paint. Locked in each room, if you go close to the doors to leave they won’t open but step away and it suddenly does. Maddening! Also slightly claustrophobic; I felt like I was stuck in a sumptuous hotel foyer in William Burroughs’ Dead City Radio, Scandal at the Jungle Hiltons… “Quite a scene it was!”

“The title of Cellar Door is inspired by JRR Tolkien’s essay English and Welsh (1955), in which the author and linguist remarked on the beauty of the words “cellar door” – they have become a famous example of euphonious phrasing.”

Now I’m very awake. It doesn’t surprise me Greaud showed “Tremors were forever” in Tokyo last year. Talking about tremors, is there a connection with Miles Davis’ 1970 album, also called the Cellar Door Sessions? I am kept awake by questions and reverberations. It’s too late to go back to sleep. And I keep thinking of one of the first exhibitions I saw in London at the Hayward Gallery in 1995, a retrospective of Yves Klein (left).

There are echoes of Yves Klein ideas in Greaud. The sweet melodic-sounding celador lollies loll around the mind as much as the mouth (lollies with no sweetness, or taste). Go ahead and repeat the word, cellar door – over and over – and you feel like a child repeating a new word endlessly just for the joy of hearing it.

Advertising and repetition, anyone, anyone? Take a look at the “marketing website” set up for these non-taste lollies. It’s the words cellar door, to celador, the brand – similar to International Yves Klein Blue.

Greaud’s sense of delight and ideas are a new tremor of Yves Klein. Illusion Is A Revolutionary Weapon, M46 paintball gun with IKB (International Klein Blue – paintballs), 2007 is a M46 paint ball gun with IKB paint balls – a cool tribute to the cool artist. And it also looks fun!

I had to wake up and tell you all this.

Greaud succeeded in waking me up this morning with dreams as vivid as naked women writhing in International Yves Klein blue-coloured paint. The bluest of blue.

Those doors got into my dreams. I hope this 29-year-old artist keeps up and is not taken from the world too early as Yves Klein (at age 34). I might not enjoy these dreams of doors; but I do like meandering through Greaud’s imagination and dreams.