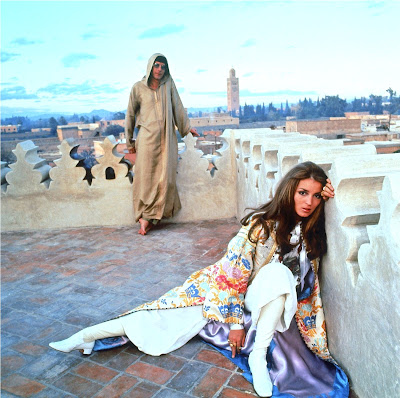 So I loitered around Duty Free at Marrakesh airport to pass the time before my flight back to London. Like the Guerlain groupie I am, I hung around the counter and without much thought, I spritzed myself with their old-school men’s fragrance, Habit Rouge… 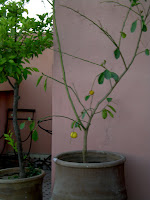 From now on, it’s going to be near impossible not to think of Morocco when I next smell Habit Rouge. It is Marrakesh: the lemon top notes with middle notes of woods – all found in Moroccco – such as Sandal and Cedar, with a good dose of 60s patchouli. Then the deeper notes are leather. I felt like I had just left a souk.

Which I literally had, that morning. I had been in the main square, Djemma-El-Fna, standing at the orange juice stall with a glass of fresh grapefruit juice and a bag filled with a pair of babouches (Moroccan leather shoes) and a bottle of Moroccan Rose oil.

While the plane dived back into the milky-tea sky of London, the smell conjured images of the Gettys on the rooftop of their home, the Pleasure Palace, in Marrakesh in 1969.

Thudding down at Gatwick airport, and all smells, in general, become sanitised and anodyne – in other words, Western. By the time I’m outside the airport and on the train home, the only thing that has an intense smell is my wrist where I sprayed this perfume. It’s then I realised this Oriental, the first Oriental fragrance for men, might be a little too dramatic for some “modern” noses, peut-être. However, I’d be very interested to meet the man who can wear this well.