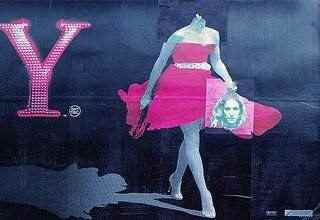 An anonymous East Londoner handy with a knife – sound familiar?

Exactly one hundred and twenty years after the Jack the Ripper murders, his ghost still looms large around his old stomping ground through an anonymous graffiti artist who decapitates ad posters.

You may miss it.

Like this one for Uniqlo on Shoreditch High Street/Old Street E1. Or the truly ghoulish Carrie Bradshaw in the Sex and the City movie poster on Mare Street in Hackney.

Despite many people at the time claiming to be Jack the Ripper, the case remains unsolved.

The most famous confession letter began, “Dear Boss…” in cut-out words from the newspaper.

This is “Dear Boss,” writ large.