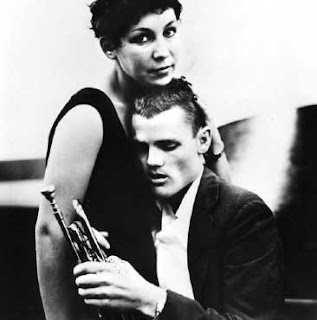 “Some people don’t have enough ears to tell the difference”
– Chet Baker in Bruce Weber’s documentary, Let’s Get Lost, when asked if people confused him with Miles Davis, and every other trumpet player from the era.

An immaculate woman in her 70s sat in front of me in the cinema, by herself, dressed in a summer suit with her ash-blonde coiffure blow dried to candy floss perfection.

With perfect red manicured nails, she kept checking the mirror in her gold compact.

And then I realized, she was wiping away tears – only fifteen minutes into the film.

Almost blue.
Almost doing the things we used to do,
there’s a girl here
and she’s almost you.

Oh! Why the tears?

Perhaps she was once one of the girls in the film? Maybe she knew Chet, and there was a time when she happily flirted with disaster?

Or, perhaps like Chet said in the film about himself, all her friends and lovers are no longer here?

Maybe it’s just the way he sings break her heart all over again, and again.