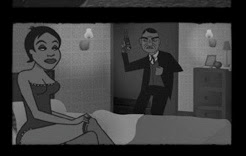 Stagger Lee turns up in songs like a recurring nightmare. He is the original bad motherfucker.

The story goes that Stag Lee killed his friend Billy Lyons or “De Lion” in 1895 over a Stetson hat. Each songs tells its own version of this charismatic pimp and cardsharp. Here’s the original hat incident as re-counted in the St Louis Missouri Globe-Democrat in 1895:

William Lyons, 25, a levee hand, was shot in the abdomen yesterday evening at 10 o’clock in the saloon of Bill Curtis, at Eleventh and Morgan Streets, by Lee Sheldon, a carriage driver. Lyons and Sheldon were friends and were talking together. Both parties, it seems, had been drinking and were feeling in exuberant spirits. The discussion drifted to politics, and an argument was started, the conclusion of which was that Lyons snatched Sheldon’s hat from his head. The latter indignantly demanded its return. Lyons refused, and Sheldon withdrew his revolver and shot Lyons in the abdomen. When his victim fell to the floor Sheldon took his hat from the hand of the wounded man and coolly walked away. He was subsequently arrested and locked up at the Chestnut Street Station. Lyons was taken to the Dispensary, where his wounds were pronounced serious. Lee Sheldon is also known as ‘Stag’ Lee.

By the 1910s, the story of Stag Lee was well-known in African-American communities along the lower Mississippi River. Mississippi John Hurt, from the Delta, did the first recording in the 1920s talking about “that bad man, cruel Stagger Lee”. The story then migrated to the mountains where musicians played it on porches in the traditional string-band style of the traditional Appalachian ballad.

My favourite, and most twisted, version is Nick Cave’s Murder Ballads (1996). According to Nick Cave, talking in Stag Lee’s voice, he was an openly gay criminal, who killed the macho boyfriend of the prostitute Nellie Bound.

What will be the next incarnation of this folk anti-hero? I’d like to know. It’s a story that changes shape as much as the Devil. But one thing’s for sure, it’s the Devil – and Stagger Lee – with the best tunes.